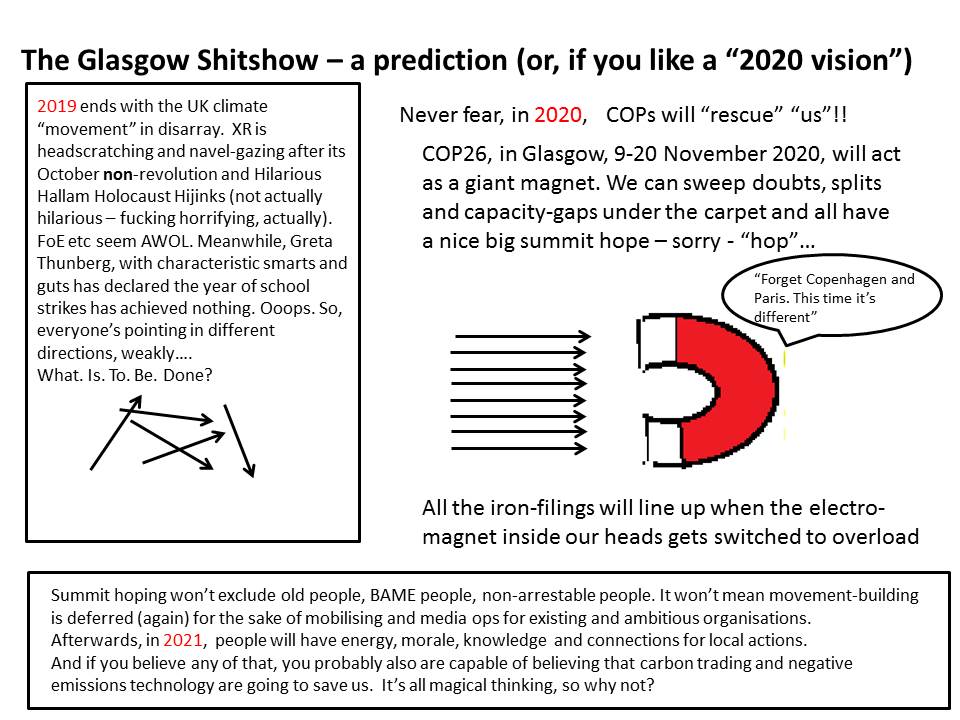 Right now there’s a lot of politicians flapping their meat in Madrid, at the 25th “Conference of the Parties” to the United Nations Framework Convention on Climate Change.  Late next year they will be flapping their meat in Glasgow. It will be the first COP to be held in the UK (though there was 1994’s “Global Forum – of that, more later).

And what will the build-up to the Glasgow COP allow (or “afford” if you do all that ANT hand-wavy stuff)?  It will allow groups to forget their differences (internal, external), their failures, their inability to do local capacity-building, their aimlessness.  It will allow them to put on a series of feeder events for the mother of all emotacycles – a big set-piece climate conference in the UK (I’m assuming indyref2 can’t happen by next November).

The whole thing is deja vu all over again, for those of us with memories stretching back to 2009.  Then – after 3 exhausting years – climate groups decided that a “big” march in London with some bumbling on to the COP in Copenhagen (“last chance to save the world, TM”)  would “build a mass movement… international this… solidarity that”  (my memory may be playing tricks, but I don’t think the words “decolonising” and “inter-sectional” were thrown around so much).

So, I have made a graphic, and there are other things afoot.

Not because I expect to change a single soul’s mind, but so I can say “I told you so” in March 2021, when the fallout is at its most clearly radioactive.  Schadenfreude is a dish best served… in advance…