Twenty plus years ago I got hold of a book called Suspects, by the film writer David Thomson.  The conceit was that Jeff Bailey - the Jimmy Stewart character in It's a Wonderful Life and George Bailey - Robert Mitchum in Out of the Past (amazing film noir) - were brothers. Well, what if "Joe"... END_OF_DOCUMENT_TOKEN_TO_BE_REPLACED

So, I wrote this over a year ago.  Nothing I have seen from the "new" organisations on the scene gives me any cause to revise what I wrote back then.  I am less prone to flounces and resentment grenades, but only marginally so. There's a much shorter (and life is short, so read that instead?)... END_OF_DOCUMENT_TOKEN_TO_BE_REPLACED 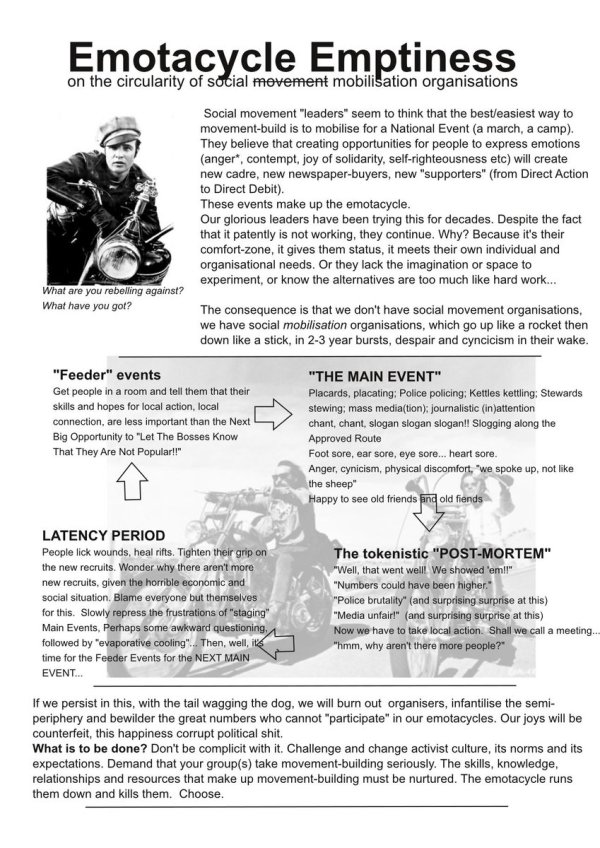 We’re all going to die.  And we’re all going to die in large  or small (1) part because social movement organisations run on emotion rather than anything approaching strategy. And they spend all their  time trying to get the next hit (2), rather than getting folks to do the long, slow, boring work of social... END_OF_DOCUMENT_TOKEN_TO_BE_REPLACED

"The shit is hitting the fan," but it’s not an emergency, according to Holdfast Bay Councillors Holdfast Bay’s elected members have overwhelmingly rejected a bid for the council to declare a climate emergency. In front of a packed public gallery of young and old, councillors were at pains to display their environmental concerns and credentials,... END_OF_DOCUMENT_TOKEN_TO_BE_REPLACED

Easy it is to see the dynamics playing out in people we don't like.  Easy it is to see how the complexities, ambiguities and downright extra-messiness of Modern Life can lead people to reach for simple(minded) "solutions" and slogans like "Make America Great Again" and "Take Back Control." Not so easy to spot it, or... END_OF_DOCUMENT_TOKEN_TO_BE_REPLACED