Where it comes from and what it does: Sabatier and Jenkins-Smith developed it in response to the inadequacies of the existing policy theories, which mostly focused on incremental change.

“Paul Sabatier and Hank Jenkins-Smith (1988,1999) developed the ACF to explain intense conflicts over complex policy issues. The ACF presumes that policy subsystems involve stakeholders aggregated into “advocacy coalitions” based on shared policy core beliefs and a non-trivial degree of coordination.3 Policy core beliefs are normative and causal perceptions that are restricted to, but span, an entire policy subsystem.”  (Weible, 2005: 462)

What it is good at: The battles (of words, interests) between competing coalitions, over prolonged periods

What its critics claim it is not good at: It’s hard to operationalise – got to work hard to identify the overlaps in the actions and beliefs of coalitions.

Not always clear how coalitions form, how they are sustained, what happens to defectors.

Matti, S. and Sandstrom, A. 2013. The Defining Elements of Advocacy Coalitions: Continuing the Search for Explanations for Coordination and Coalition Structures. Review of Policy Research, Vol. 30, (2), pp.240-257.

Mukherjee, I. and Howlett, M. 2015. Who Is a Stream? Epistemic Communities, Instrument Constituencies and Advocacy Coalitions in Public Policy-Making. Politics and Governance, Vol. 3, (2), pp.65-75.

Other explanations of it:
Paul Cairney’s always excellent “1000 words”
https://paulcairney.wordpress.com/2013/10/30/policy-concepts-in-1000-words-the-advocacy-coalition-framework/

Two videos (yes, one of them is mine) 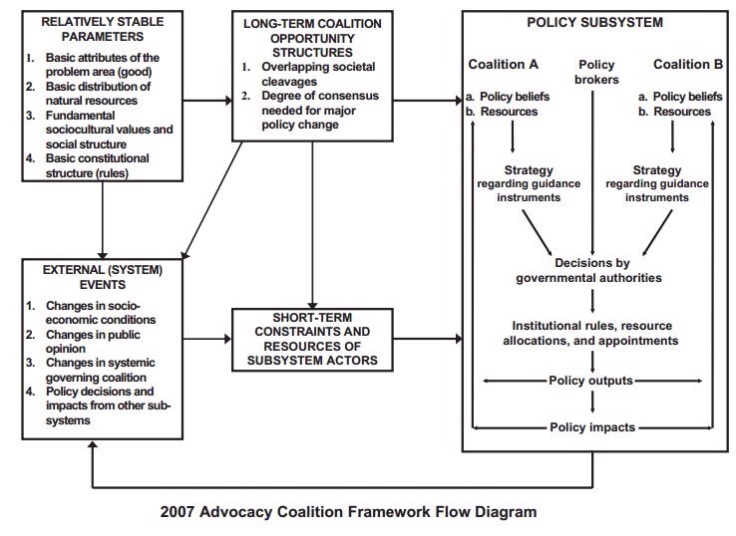 Sabatier and Jenkins-Smith’s (1993) policy advocacy coalition framework is different than the two discussed above. The key idea of the framework is that there exist sets of core ideas about causation and value in public policy. These coalitions form because certain interests link to them. There are several such ideas, which create about two to four coalitions, and it is possible to map these networks of actors within a policy sector. Change comes from the ability of these ideas to adapt—in their noncore aspect—ranging around a whole series of operational questions and “what works” in any one time or place. Partly in response to wider social and economic changes or from political events and also from policy learning, the balance of power in these networks changes and the structure and memberships of the coalitions alter.
The cogency of this approach is threefold. First, it leaves behind the idea that policy sectors are composed of integrated networks; instead, they are a political terrain through which different collations fight it out, which is far closer to contemporary reality. Second, the ideational approach to policymaking is fully integrated into the way in which the coalitions operate, so it provides a grounded way of understanding the importance of discourse in the political process. Third, the advocates have developed an effective research program to map the development of advocacy coalitions, through the coding of representation to legislative committees.