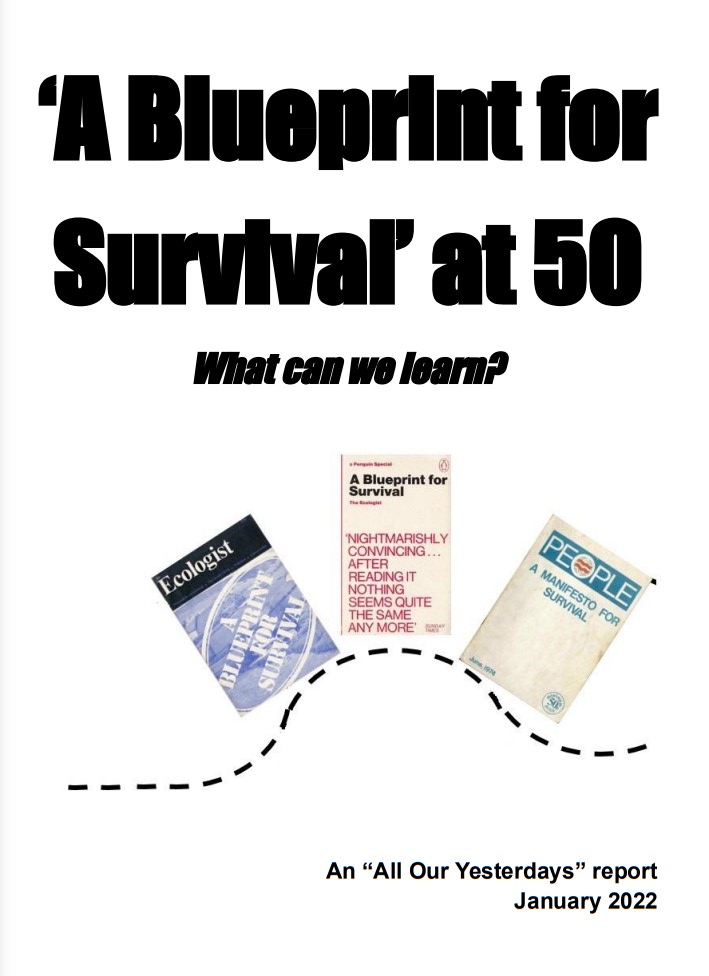 ‘A Blueprint for Survival,’ the first big eco-manifesto, is 50. Below I explore where it came from, how it was received and why its lessons still matter – as part of the “All Our Yesterdays” project. See the full report on which this guest post below is based here.

On Thursday 13th January 1972 the eminent scientist Frank Fraser Darling brandished “the sanest statement on the problems at large that I have seen, a good deal saner than many of the comments in the scientific journals, particularly from America. It is not overdramatic”  He was speaking at a press conference announcing “The Blueprint for Survival”, which hit the world’s newspapers the following day.

The Blueprint arrived into a world that had, since the late 60s, become worried not just about the ‘traditional’ issues of smog in cities, but more global concerns

Oil spills such as Torrey Canyon (1967), Santa Barbara (1969)  and the Cuyahoga River literally catching fire because of the amount of chemicals in it had, along with the “Earth Rise” photo taken by NASA astronauts, made more people aware of the fragility of the planet and the damage being done. In April 1970 millions of Americans had participated in teach-ins and protests as part of the first Earth Day

Meanwhile, governments were responding – the European Community announced 1969-70 as the Year of Conservation, Nixon’s government passed legislation and set up the Environmental Protection Agency (the one gutted by Trump) and the UK government created a Department for the Environment.

The Ecologist magazine had been set up in 1970, by Edward “Teddy” Goldsmith and a group of journalists and campaigners, to little attention – Blueprint briefly changed all that.

The Blueprint – what it said, how it was received.

With the first big international environment conference (in Stockholm, in June) five months away, the Blueprint caused a stir. The 22 page manifesto is a now-familiar litany of environmental and social woes (with carbon dioxide build-up only briefly referenced in an appendix). The problems included overpopulation, pollution, species loss. But Blueprint went beyond this, boldly claiming to have a 100 year plan, involving radical decentralisation and stepping back from further industrial growth.

What made the Blueprint surprising and perhaps more impactful was the broad endorsement of Darling and 32 other (male) scientists and notable figures, including Julian Huxley and Peter Scott – a kind of David Attenborough/Chris Packham/George Monbiot mash-up.

The media reception was relatively unsurprising, with the Guardian largely approving, the Telegraph harrumphing.  The (pre-Murdoch) Times editorialised that ““the thesis is too plausible to be dismissed. It has been edging its way into the universe of popular debate for some time now. ”. Perhaps the most surprising to modern readers is the Daily Mail’s response. While its science correspondent said the Blueprint’s proposals were “frequently vague, and too often meaningless”  the Mail’s editorial opined ““we live in a world where our instinct for survival has yet to curb our greed. At such  a time, surely the prophets of doom deserve to be heard with as much respect as those who continue to worship the Gross National Product.”“

The real fur flew in the more specialist journals. Nature published a scathing editorial under the headline “The Case against Hysteria.”  The New Scientist derided Nature and the Telegraph as “ostriches”,  pointing out that it was possible to underestimate dangers – “where compromise and accommodation become a political way of life, they engender the belief that any analysis demanding a more rigorous solution must automatically be erroneous.”

The academic response was more muted.  Most attention went to critiques of “the Limits to Growth” report, published two months later. The prestigious Science Policy Research Unit at the University of Sussex called this “Malthus with a computer,” and dismissed the Blueprint as “doomsday literature.”

Meanwhile, Goldsmith told the Guardian that interest was “enormous” with “business concerns, educationists and private individuals” calling for copies. Blueprint was quickly turned into a short book, it sold somewhere between half a million and three quarters of a million copies.

The Blueprint had concluded with the announcement of a “Movement for Survival.”  However, the Ecologist simply lacked the capacity to deal with all the responses. Lesley Whittaker, one of the founders of the political party People, inspired by the call for a new movement,  recalls:

““When we eventually took over Movement for Survival, Teddy told us that the Ecologist staff had not even looked at any of the replies. They were just in open cardboard boxes in which the torn-out back pages were dumped. The move of The Ecologist and its people to Cornwall had been a major distraction, and there was barely enough of an organisation to run the growing Ecologist, let alone handle the huge swell of interest the announcement of MfS had generated. I think they were all amazed and rather scared by the scale of the success.”

In the February 1974 election campaign Teddy Goldsmith stood as a candidate for People in Suffolk, campaigning with a camel.  He did not pass through the eye of the needle to a parliamentary seat. Nevertheless, after slow steady growth, People became the Ecology Party which in turn became, in 1985, the Green Party (for a history of this period, see here).

The concern about environmental issues subsided, partly because the more lurid predictions of imminent eco-catastrophe did not materialise, partly because governments made agreements and seemed to be talking things seriously and perhaps because, as TS Eliot said “Humankind cannot bear very much reality.”

Environmental concerns have of course returned to the fore repeatedly since then – from 1987 to 1992, from 2006 to 2009, and from 2018 to 2021.  Each wave of concern leaves a residue of new organisations, legislation and a flurry of books that end up in charity shops.  Meanwhile, the level of atmospheric carbon dioxide remorselessly increases and other species wink out of existence.

What we can learn

There are various lessons we can draw from the experience of the Blueprint (the subject of a report by one of the authors of this article). Firstly, harnessing and sustaining the energy and enthusiasm of new recruits is always challenging for new environmental groups  – this “absorptive capacity” is necessary, but very hard to create. Secondly, and likely related to this, waves of concern subside after a peak, and a period of “abeyance” often follows this heightened interest, with real challenges for the now-diminished number of activists to maintain activity and morale.

Thirdly, scientifically-oriented environmentalists are usually poor at understanding political persuasion/how politics works (see Don’t Look Up for more about this!). Goldsmith’s romanticised, and sometimes authoritarian and moralistic views on the good life had little resonance with wider publics. It was as the new environmental movement, which he helped to inspire in the UK, drew in a wider constituency of supporters and confronted the challenges of translating ecological crisis into a strategy for change that it developed a more sophisticated political programme.