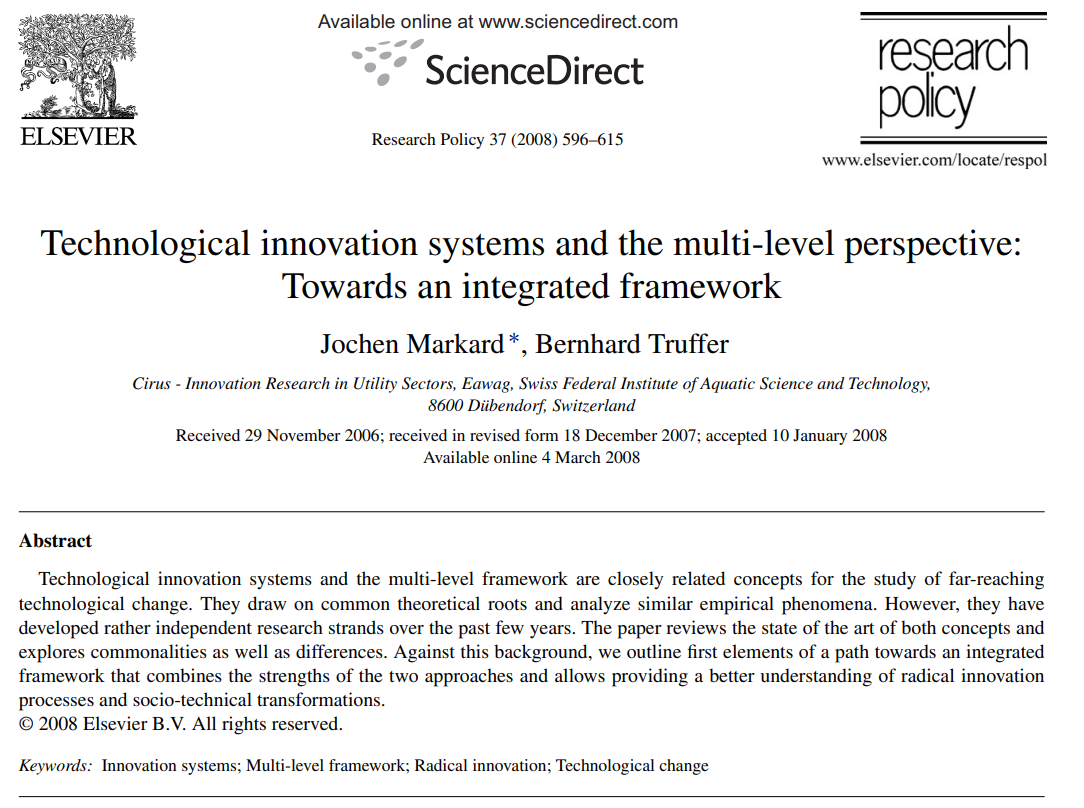 So, focusing my next batch of academic reading around the Technological Innovation Systems concept. If you have other things on this, besides these seven, you think I should read, lemme know.

Markard J. and Truffer, B. 2008. Technological innovation systems and the multi-level perspective: Towards an integrated framework. Research Policy 37 596–615

Lots of useful stuff here, especially on the respective strengths and weaknesses of the two lenses.

Both strands have emerged largely independent of each other although they aim at explaining similar empirical phenomena and are based on common conceptual grounds. Both highlight the importance of networks and learning processes together with the crucial role of institutions for successful innovation processes. Both acknowledge phenomena such as path dependency, lock-in, interdependence, non-linearity and coupled dynamics. More generally, both concepts are rooted in evolutionary economic theorizing. While one may argue that system theory in sociology or natural sciences is quite different from evolutionary theory (cf. Malerba, 2002, p. 249), this does not apply for the innovation systems framework. (Markard & Truffer, B. 2008; 596)

A system in general is an entity comprising elements that interact with one another. It is a model of reality designed for analytical purpose. This implies a clear distinction between the system and its environment. Systems are characterized by their structure including system borders, the number and type of system elements, their interrelations and the relations between the system and its environment. Innovation systems, more specifically, can be conceptualized as a set of organizations and institutions and the relationships among them (Edquist, 2005).1 Organizations (also actors or agents) typically encompass private firms or firm sub-units, governmental and non-governmental agencies, universities, research facilities, venture capitalists, associations, etc. Institutions, on the other hand, can be regarded as the rules of the game (ibid.) comprising laws and regulations, sociocultural as well as technical norms, use patterns, shared expectations, etc. (Markard & Truffer, B. 2008; 597)

Against the background of these challenges it is not surprising that many articles, although explicitly based on the multi-level concept, have not proven to deal very [page break] carefully with the regime concept in empirical terms. They say little about how regime(s) were delineated empirically (e.g. Geels, 2002, 2006a,b; Raven, 2004) or what constitutes the regime before and after a transition (e.g. Geels, 2005a). Moreover, there is no reflection or even justification why the regime notion has been applied in a certain way, e.g. at the level of industrial sectors in a selected country (Raven, 2004, 2007; Verbong and Geels, 2007). (Markard & Truffer, B. 2008; 606-7)

Moreover, the multi-level approach is largely confined to the niche level in its analysis of emerging novelties. This is problematic for three reasons. First, there is quite a gap in terms of process complexity and aggregation between niche and regime and little explanation for dynamics beyond the niche level such as complementary effects of developments in different niches or the emergence of niche transcending institutions. The analytical distinction between technological and market niche together with the rather diffuse concept of ‘niche-accumulation’ represent first propositions to bridge this gap (Geels and Schot, 2007). Second, the concepts and tools to investigate innovation dynamics at the niche level are less elaborated than those developed for the study of innovation systems. A recent attempt to cope with the latter challenge is the suggested distinction of learning, network creation and formation of expectations as three key processes for the analysis of niche level dynamics (Geels and Raven, 2006; Geels and Schot, 2006). Little has been said, however, why these particular processes should receive particular attention. Finally, actors and strategy making have received little attention in the conceptualization of niches (Markard & Truffer, B. 2008; 609)

This conceptualization will pose analytical difficulties especially in the case of radical innovations, for which established production systems often create formidable barriers. Therefore, radical innovations are often promoted by actor networks that show little overlap with prevailing actor structures in a sector or technological field. If conceptually we try to define innovation systems in a way that they encompass also opposing actors, outsiders and critics of a certain technology, the innovation system concept will probably degenerate into a merely descriptive bracket for very different processes and structures. As a consequence, it would loose almost every explanatory power. (Markard & Truffer, B. 2008; 610)

While innovation system concepts, for example, promise to more explicitly deal with innovation activities and strategies of actor groups, an explicit concept that permits to deal with innovation processes at the level of business units and at the system level still remains to be worked out (cf. Markard and Truffer, in press). Of particular interest would be mechanisms that lead to the emergence and the prospering of TIS. Here an explicit analysis of dynamics and social construction processes is necessary. Further issues to be clarified are implications for policy and strategy formulation, performance comparisons of innovation systems, the identification of alternative trajectories for specific radical innovations, etc. (Markard & Truffer, B. 2008; 612)

8 thoughts on “TIS & MLP – “Towards an integrated framework””