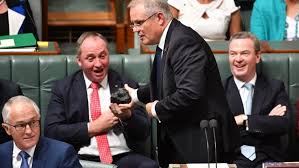 The rules of Australian climate policy are pretty straightforward

Earlier this week, Scott “lump of coal” Morrison had a phone call with Boris “can we pretend the UK is doing something about climate change because a) we’re hosting this Glasgow farce to keep up the pretence we matter post-Brexit and b) it’s something that isn’t COVID-19” Johnson. The UK version of the conversation emphasised zero carbon targets, (by 2050), something the Australians have, uh, resisted.

I may not be alone in hearing an echo (intended or otherwise) of a previous Liberal Prime Minister, John Howard, with his 2001 election line “we will decide who comes to this country and the circumstances in which they come.“ We will come back to this question of sovereignty and consequences in a bit..

For now, more directly though, the relationship between the English and the Australians on climate change has been fraught for a very long time.

The Past is, of course, Prologue

All the way back to the beginning of this issue (and lets remember, we’ve been failing to do anything about this issue – other than make it worse – for over the 30 years) the British – like everyone else – were not taken in by the Hawke and then Keating era arguments that Australian coal was particularly high quality and that Australia should get a special deal on climate policy.

In 1996 John Major’s Environment Secretary John Gummer said that the Australian government was putting coal exports to Japan before the next generation of Australians (see here and here). The following year, Tony Blair’s Foreign Secretary, Robin Cook, was similarly incredulous and dismissive of Australia’s position. “We’ve heard a large number of countries explain why a universal target is not appropriate to them. The funny thing is every time I have these discussions they all want a target that is lower than everybody else’s” [and then, in response to a complaint from the Australian Environment Minister, Robert Hill] – “I’m sorry, Australia is also part of the same globe. It is also caught up in the issue of global warming. It will also find its grandchildren affected ..and it also has to play its part in the reduction of CO2.”

Nonetheless, dumb luck and intransigence won Australia an absurdly sweet deal at Kyoto (a “reduction” target of 108% and a land-clearing clause that meant emissions could in fact go up by about 130%). And John Howard was able to avoid Kyoto ratification by pointing to Uncle Sam’s refusal. By 2006/7 though, this was unravelling, both internationally (Kyoto was ratified in 2005, the EU started its Emissions Trading Scheme etc) and domestically (remember the endless Millennium Drought? Water restrictions? Kevin “I’m from Queensland” Rudd). So, when UK economist Nicholas Stern, who had published a report, rocked up for a lightning visit in February-2007, John Howard had a problem. He’d already been mocked by Tony Jones-

Howard’s problem was that he had changed his policy but not his political strategy. He refused to genuflect before the icons: Al Gore’s scare, the drought as proof of a climate transformation, and Kyoto sanctification. For the ABC, Howard was now a figure of undisguised ridicule. His Lateline interview of 5 February 2007 began with this mocking question from Tony Jones: ‘Can you recall exactly when it was that you ceased being a climate change sceptic and became, in effect, a true believer?’

So, rather than tackle the economics of climate change (#awkward as the young folk say), Howard took – for once in his storied career – the low road.

As we can see in the Commonwealth, Parliamentary Debates, House of Representatives, 29 May 2007, 48 Howard boasted that his “policy”

This will be an Australian report for Australian conditions to preserve the strength of the Australian economy and make sure that we protect Australian jobs. It will not be a grab bag of proposals taken holus-bolus from a report written by an Englishman for European conditions and designed to promote the political objectives of the British government. That is what the Stern report is all about. Stern is not the biblical scholar of climate change that is posited by those who sit opposite. Stern has written from the perspective of an Englishman, from the European circumstance and from the European point of view.

Howard’s end came in November that year, and an ignominious one it was too. But the Liberal Party’s angst over climate change was far from over. We will skip over Brendan Nelson, and turn instead to Malcolm Turnbull. As Opposition Leader he tried to get the Liberals and Nationals on board with some sort of climate policy, arguing that failure to support some sort of emissions trading programme was electoral suicide. By the middle of 2009, for multiple reasons (not least Mr Gretch), Turnbull’s position was shaky. Perhaps seeking to sure up his climate flank by getting some reflected credibility from UK conservatives, he took a flying visit to see UK Opposition Leader David Cameron (by this time a UK Climate Bill had been passed, with bipartisan support.). Straight off the plane, Turnbull went to a radio station and did an interview, uttering the immortal words  “I will not lead a party that is not as committed to effective action on climate change as I am.”

Tony Abbott heard this on his car radio and, well, having just announced that climate science was “absolute crap”, was … the history does not need – or bear – repeating.

And here we are again, still. A year on from the Eastern Seaboard burning down. Lots of the buyers of “our” coal announcing 2050 zero carbon targets. The Nationals advocating a boycott of a bank for being a bank and taking decisions about risk (both financial and reputational).

Every day – no, let me rephrase that – every FUCKING day – there is new evidence of our species’ peril, and of the utter incompetence and wilful blindness of our “leaders.” This is going to be so hard to explain even in ten years time. How these people can go to an election with zero climate or energy policy (and win). How they can grab lumps of coal and grab hands of people who are in trauma and use them as a photo op. How they can think that warmed over jingo-ism is going to work.

This is not 2001. Climate change is not a bunch of refugees. The issues are not the same. The dog whistle won’t work. The idea that climate change is some effeminate perfidious “English” thing is palpable nonsense – no, bollocks. Also, Scottie from Marketing is no Johnnie: he’s just not.

Any Australian with two brain cells to rub together knows that we face imminent and unrelenting peril domestically. There will be sanctions – formal or informal – for countries that behave badly. As Malcolm Turnbull (among others) has recently said, frontier carbon taxes will be a thing.

We have had a generation to understand, to act. We have squandered that, thanks to a brilliant and determined campaign by fossil fuel incumbents, thanks to the awfulness of both the Coalition and Labor on climate, and thanks to failure to move beyond comforting social movement rituals.

Here comes the age of consequences. If you are young, realise that the “adults” have failed you. They have no plans other than to keep their power, privilege and comfort for as long as they can. You will inherit … ashes. Literal damned ashes.