On 25 June 1969 Ralph Slayter, an Australian scientist, gave one of the first (but not the first – that’s for another time) warnings of the dangers of the build up of carbon dioxide in the atmosphere.

Slayter was talking at the Australian National University,  as part of a lecture series on ‘Man and the New Biology.’  Slayter’s lecture was entitled ‘Man’s Place in Nature’.  There were several references to carbon dioxide. Here below is the clearest. 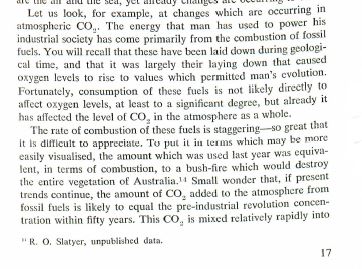 Slayter would go on to a prestigious career in international scientific administration.  In 1989 he became the first Chief Scientist in Australia.  One of the key issues he was asked to tackle was… climate change.

We knew. We knew.  We chose not to heed the warnings we were given.