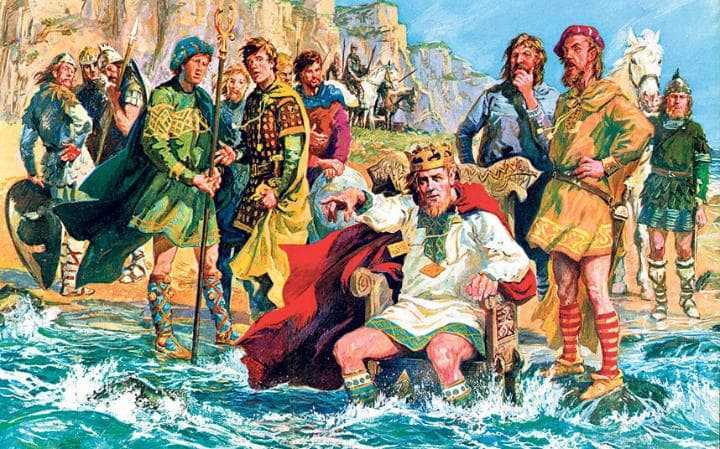 King Canute eh?  What an arrogant tosser, thinking he could command the tide not to come in.  Except I already knew he wasn’t – that he had (probably) pulled the stunt – if he ever did-  to get some of his more over-enthusiastically sycophantic courtiers to knock it off.  What I didn’t know was that a corking academic article had been written about him – or rather, using his story to make some points about structure, agency, yadder yadder yadder.

As per Paul Cairney’s advice –

If you’re still with me, have a quick look at Hay’s King Canute article(or my summary of it). Yes, that’s right: he got a whole article out of King Canute. I couldn’t believe it either. I was gobsmacked when I realised how good it was too.

I went and read

Far too much to go into in great detail, but here are some clips.;

In particular, the (various) stories of King Canute and the waves alert us to the need: (1) to maintain a clear distinction between the empirical and the ontological; (2) to resist the temptation to attempt an empirical adjudication of ontological issues (or, indeed, an ontological adjudication of empirical issues); (3) to differentiate clearly between the capacities of agents with respect to material/physical structures on the one hand, and social/political structures on the other; (4) to acknowledge the significance of unintended consequences; (5) to attend to the ‘performative’ dimensions of agency; and (6) to recognise the dangers inherent in an overly instrumental view of actors’ motivations and intentions.
(Hay, 2009:260)

This raises a first point of more general significance, and one all too frequently overlooked in both the existing literature on structure and agency and in political analysis more generally. It is simply stated as the need to differentiate very clearly between the capacities of actors to negotiate the opportunities and constraints presented to them by natural/physical structures and those presented to them by social/political structures.
(Hay, 2009:265)

Canute’s reign occurred at a time when sea levels were rising (Ettlinger, 1952, p. 236). Indeed, as many of the contemporary sources testify, in 1014 (the year he was declared king of England by the invading Danish forces with the death of his father), significant areas of the East of England in particular were submerged by unprecedentedly high tides. There was considerable loss of life (Anglo-Saxon Chronicle, E 1014, p.145; Henry of Huntingdon, 1996 [c.1140], vi, para 11, p. 355; William of Malmesbury, 1989 [1125], para. 179, p. 165). Accordingly, by the early to mid-1020s, once Canute was more firmly established on the throne, it might well have appeared that the only threat to his sovereign authority came from the sea itself.9
(Hay, 2009:271)

… in William H. Riker’s terms he is revealed as something of a heresthetician. This rather interesting concept draws attention to the often overlooked artistic, rhetorical and performative dimensions of agency which arguably the story of Canute and the waves displays in abundance….

In the most general terms, a heresthetician is a creative agent who strives to alter decisively the strategic context in which he or she finds him or herself so as to render it more amenable to strategies for realising his or her intentions (Riker, 1982; 1984; 1986; see also McLean, 2002; Shepsle, 2003).
Yet it is not just the general category of heresthetics that is relevant here. For Riker goes on to identify three separate varieties of heresthetics. These he associates with control of the political agenda, strategic voting (logrolling and so forth) and, rather more importantly for our purposes, what he terms the ‘manipulation of issue dimensions’ (Riker, 1982, pp. 215–32; 1986).
(Hay, 2009:276)
Heresthetics is a KEY thing in the terrain building within which the streams ‘naturally’ flow…