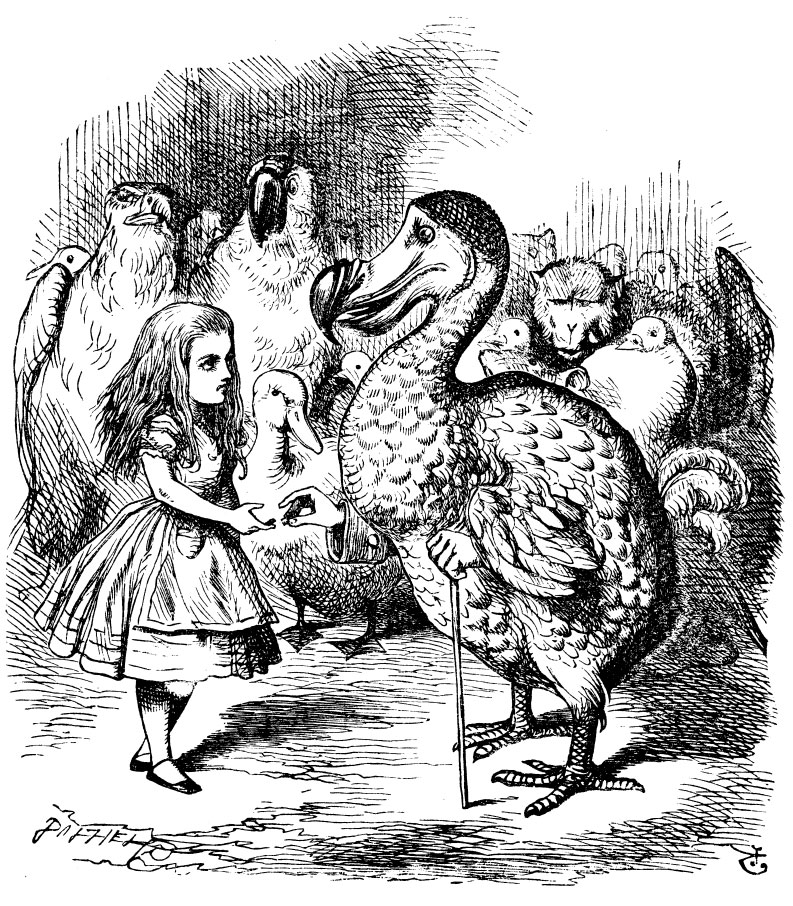 Went do a corking seminar this afternoon, at the end (well, middle) of a corking day (more on that another time).

It was by Gitanjali Pyndiah, a third year PhD student at Goldsmith’s University (scene of a crime against academia and activism 10 days ago, but I digress).

She’s looking at how ‘we’ (people from both Mauritius and the wider world) think of and portray … the dodo. 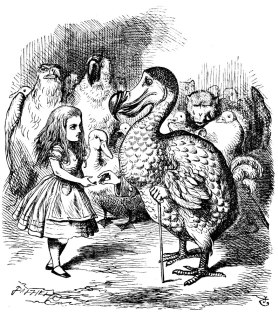 The title was “The objet-Dodo: reframing extinction in a post-colonial context.“

This blog post is NOT a verbatim summary of what she said, more of the interesting stuff (and also my stuff) that came out of the talk and the discussion.

She started in with a brief history of the dodo and how it is native to Mauritius. It got wiped out by the Dutch, who then scuttled off and left the island to be colonized by the French, who had it till 1810, when the English took it (but left the language, laws and everything else untouched).

There was a good short description of “Imperial Nostalgia” –

a mood of nostalgia that makes racial domination appear innocent and pure; people mourning the passing or transformation of what they have caused to be transformed. Imperialist nostalgia revolves around a paradox: A person kills somebody and then mourns the victim; or someone deliberately alters a life form and then regrets that things have not remained as they were. . . Imperialist nostalgia uses a pose of “innocent yearning” both to capture peoples’ imagination and to conceal its complicity with often brutal domination (R. Rosaldo, Culture and Truth: The Remaking of Social Analysis)

There was a fascinating bit on the biology of islands and “island dwarfism” – how things either shrink or become giant when isolated. May use it to think about social movements some more, and how they shape people’s habits… But I digress

There was a fascinating section on how the Oxford Dodo (on display, in multiple senses, at the Natural History Museum there) is worth thinking about.

There was a bit on Derrida where my attention became decidely undecidable; I thought and wrote some theoretical stuff about my PhD (on the dialectical issue lifecycle model, since you ask), which would make my supervisor happy, but he doesn’t read this blog.

Then there was some cool stuff on a Mauritian artist whose representations of the dodo are again worth thinking with.

This was followed by a lively discussion. If only I could read my hand writing that suggested I read something “Essay on Cr…., essay on…..”

Other books and essays to add to the tottering pile

“Borders, boundaries and frameworks.” Hmm, can’t find, but this, by someone called Mae Henderson, might be it?

Solastalgia – sadness for what we’ve lost thanks to climate change.

Solastalgia is a neologism coined by an Australian; The philosopher named Glenn Albrecht in 2003 with the first article published on this concept in 2005.[1] It describes a form of psychic or existential distress caused by environmental change, such as mining or climate change.

Elizabeth Kolbert and her book on The Sixth Great Extinction

Extinction as a passive term where the doer is missing, but in Chile the dictatorship would “disappear” people, as a verb…

The Portuguese only have one word that covers exploration and exploitation, which is sensible and honest, if you think about it…

The dodo as US (we are stupid but don’t know it). An invading alien would do for us the way the Dutch did for the dodo. As per “The Arrival” which stars Charlie Sheen as a rocket scientist…

Martha the Passenger Pigeon and the last Tasmanian Tiger (that we know about  and that sad sad footage.)

In sociology, a boundary object is information, such as specimens, field notes, and maps, used in different ways by different communities. Boundary objects are plastic, interpreted differently across communities but with enough immutable content to maintain integrity. The concept was introduced by Susan Leigh Star and James R. Griesemer in a 1989 publication (p. 393):

The animals we choose to represent us (the hippy students of UC Santa Cruz getting the banana slug instead of the sea lion. But not every animal “means” the same thing the world over, of course…)