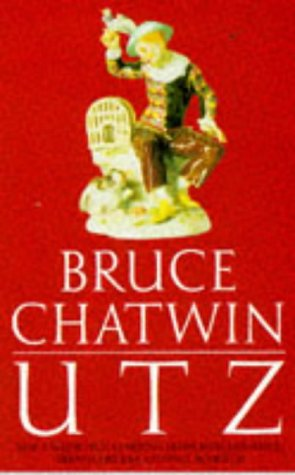 This slender gem is one I shall have to come back to again, I think.

The narrator meets the titular Utz – a fascinating MittelEuropean figure just the once, but is able to piece together the before and the after (the first scene tells of Utz’s funeral).

Its set mostly in Prague, from the 50s to the 70s, and concerns well – everything – love, joy, tyranny, freedom and… collecting – becoming prisoners of the things that entrance and captivate us (in Utz’s case his collection of porcelain figures).

Chatwin was a helluva writer (I need to re-read The Songlines), and erudite with it – there’s a lot of words I had to look up. Utz is a fascinating character, well-drawn, sympathetic and awful at the same time (so, a human). The claustrophobia and oppressiveness of the Soviet era (the book published just before “everything changed”) is nicely done…

There was also a party of English ‘dissident-watchers’ – a Professor of Modern History and three literary ladies – who, instead of watching animals in an East African game park, had come to spy on that other endangered species, the East European intellectual. Was the creature still at large? What should one feed it? Would it compose some suitable words to help the anti-Communist crusade?

They drank whisky on their credit cards , ate a lot of peanuts, and plainly hoped they were being followed. I hoped that, when they did meet a dissident, they got their fingers bitten off.

In a Pig’s Ear by Paul Bryers