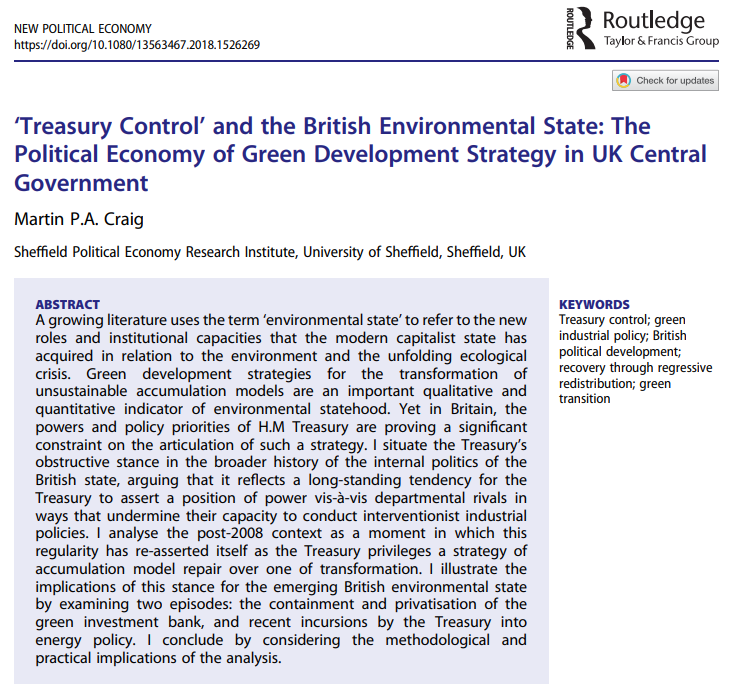 This was damned good

As the epigram wants you to understand, this is not new.

“Treasury control is something that you live under, that you suffer from, that you profit by; and if you cannot define it, well – Lord Morley used to say that he could not define an elephant, but he knew it when he saw it, and you know Treasury control when you feel it.” Higgs (1924, p. 122)

Craig makes good points about the gaps in the literature.

Much of the environmental state literature emphasises international comparisons and generalisations, with researchers frequently devoting their efforts to constructing ideal-typical typologies of different kinds of environmental state (for instance Christoff 2005, Duit 2016, Sommerer and Lim 2016). Yet the environmental state concept has great potential as a tool through which to describe and analyse the domestic political economies of green development strategy in individual countries. I adopt such a perspective in this paper so as to examine the emergence of the British environmental state in its unique historical and political-economic context and identify certain contextually-specific barriers that are obstructing its capacity to deliver green development strategy (Craig,2020:2)

There is HEAPS of good stuff…

, a set of historically enduring policy priorities continue to pattern the exercise of Treasury control – priorities that have historically reinforced the predominance of commercial finance capital in the country’s accumulation model, and which are antithetical to the emergence of a green development strategy able to transform the country’s capitalist model. The Treasury has historically demonstrated an obstructive and often hostile stance towards the kinds of transformative and production-oriented industrial policies that green development strategy implies (Ingham 1984). During moments of economic crisis, it has exercised control over nascent initiatives of this nature by other government departments, sacrificing them to the goal of repairing (with as few adaptations as possible) the country’s finance-dominated accumulation model. The pattern is witnessed in the post-2008 context, as it has been throughout the peacetime politics of the twentieth century (Craig,2020:2)

And his conclusions -about the Green Investment Bank and support for Oil and Gas – are bang on the, um, money…

That the Treasury placed small priority on curbing carbon emissions is evident in the conduct of fiscal policy – shown, for example, in the counter-intuitive 2015 decision to subject renewable energy generators to Britain’s principal carbon tax. The timing of this decision, coming soon after the election, suggests that the demise of coalition politics has bolstered Treasury control over energy policy by removing the need for concessions to coalition partners in other departments. Perhaps more significant for the purposes of this paper is the lightening on the tax burden on the oil and gas sector in the post-2008 context. One example is the suit of so-called ‘field allowances’, which waive around 50 per cent of the corporation tax of producers operating at those sites in the North Sea deemed strategically important. These allowances were worth around £3bn in the period between 2012 and 2014 (Friends of the Earth 2016). (Craig,2020:10)

In 2013 a new allowance was announced which allows shale explorers to offset 75 per cent of their capital expenditure against corporate tax. (Craig,2020:11)

Gas power has been central to British generation since its rapid expansion in the 1990s. Environmentalist critics have argued that the Treasury’s position on fossil fuel taxation constitutes a parallel energy policy incentivising a second ‘dash for gas’ (Powell 2014). This much is quite coherent with the broader project of recovery through regressive redistribution: the technology requires fewer subsidies than renewable energy technologies in order to bring new capacity to fruition and remains, on average, the cheapest form of electricity to produce in Britain (BEIS 2016).3 Because renewable energy plant subsidies in Britain are in large part financed by electricity consumers through their energy bills, a gas-centred strategy also equates to a lower burden on industrial and household income than would be the case if a more rapid transition to renewables were to be undertaken. (Craig,2020:11)

The Treasury’s incursions into energy policy thus suggest a willingness to sacrifice environmental policy commitments to a short-term goal of accumulation model repair. However, they also suggest a more nuanced interpretation of the Treasury view than one suggesting an inflexible economic liberalism: ironically, the forms of Treasury control in energy and environmental policy examined here amount to an extensive and interventionist industrial policy, albeit one oriented to accumulation [page break] model repair rather than transformation. Thus, for all of its historic antipathy to past attempts by public officials to steer the course of economic development in ways that reflect public purposes, the Treasury appears to have itself ‘picked a winner’ on the basis of its own strategic priorities: the oil and gas sector (Craig,2020:11-2)

Friends of the Earth, 2016. Environmental audit committee inquiry ‘Sustainability and the Treasury’: Written evidence submitted by friends of the earth. Available from: [Accessed 30 August 2016].

Powell, D., 2014. Briefing: transforming the treasury. London: Friends of the Earth. Available from: