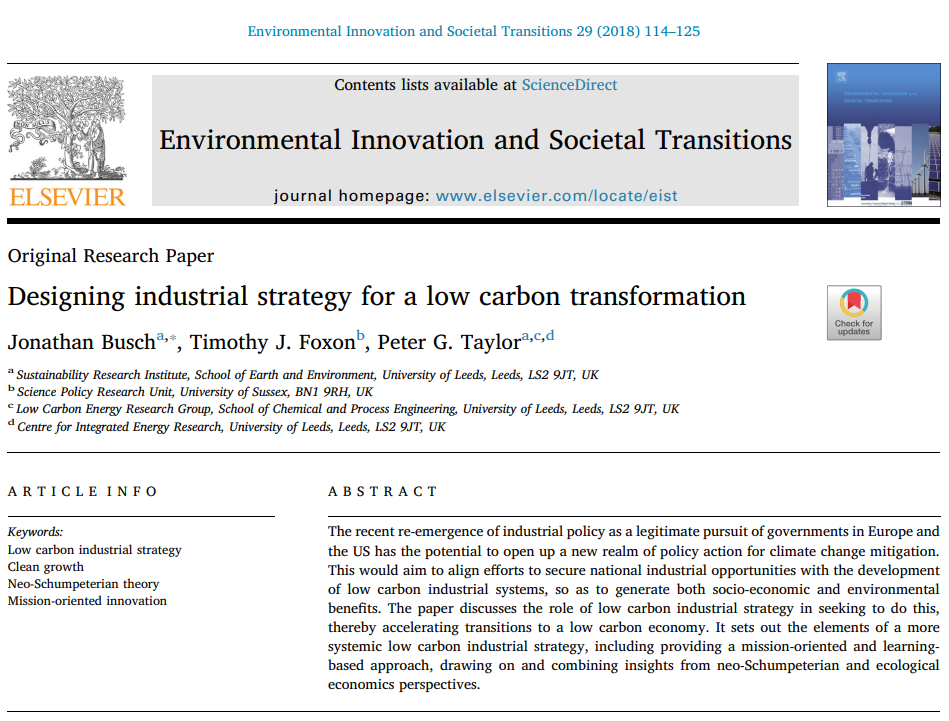 Much meaty goodness in this comprehensive overview of green industrial policy and the literature around it… The authors “draw on and combine insights from neo-Schumpeterian (evolutionary) and ecological economics perspectives to set out elements of an integrated low carbon industrial strategy” (Busch et al 2018: 115)

Here’s a bunch of quotes (non-exhausitve – there’s a LOT of perceptive scoping and collating going on here).

The integration of industrial development and environmental goals has been advocated by a number of recent reports. Lütkenhorst et al. (2014a,b) elaborate a Green Industrial Policy that responds to four key challenges: (1) pervasive market failures, (2) uncertainty and long time horizons, (3) the creation of new pathways, and (4) the disruption of old pathways. In this, they pay particular attention to the normative nature of the social goals that such a policy would entail, and the need for this to be democratically negotiated (Busch et al 2018: 115)

Drawing on the varieties of capitalism literature (P. A. Hall and Soskice, 2003), Colebrook (2016) develops a typology of industrial strategy based on the role of government that extends from command and control (most direct involvement), through co-ordinated capitalism, liberal capitalism plus, to liberal capitalism (least direct involvement). Germany and South Korea are typical examples of co-ordinated capitalism approaches to industrial strategy, and this is reflected in their approach to low carbon development (Busch et al 2018: 116)

In recognising innovation competition rather than price competition as the principal coordinating mechanism of the economy, neo-Schumpeterian theory also suggests that the idea of a single optimal development pathway that is followed by a perfect market is false. There are many different possible trajectories that economic development can follow, driven by processes of lock-in and path dependence (Fouquet, 2016; Unruh, 2002), and each trajectory may lead to radically different economic and social outcomes. Economic development pathways are determined by the activities of networks of public and private sector actors and the institutional contexts that shape the markets in which they interact. Nowhere is this more relevant than in the highly regulated energy systems that are core to low carbon transformations. The ‘optimal’ choice of possible outcomes of economic development is therefore not determined by the efficient allocation of a perfect market;  (Busch et al 2018: 116)

Carbon taxes may create a more favourable market for low carbon technologies, but they do not address the lock-in of fossil fuel industries (Unruh, 2002) or the lack of finance for innovations to cross the “valley of death” from demonstration to market diffusion1 (Gallagher et al., 2011). Instead, there is an active role for governments in creating and shaping markets, not just fixing market failures (Mazzucato, 2016, 2015a), and helping to identify key industrial sectors that can drive the transition in similar ways to previous long-term techno-economic system changes (Perez, 2010). The idea that industrial strategy should be about seeking to create and shape markets (Mazzucato, 2015a) breaks from the mainstream economics framing by rejecting the idea of a single optimal path of economic development that is followed by a perfect market. This line of argument draws on a long history of understanding economic development and structural change as the result of innovation processes (Schumpeter’s (1939) ‘creative destruction’) governed by innovation systems (Freeman, 1974). (Busch et al 2018: 117)

The strategic objectives we identify are:

2) Action to manage energy demand as well as supply

And they lay out a case for an “entrepreneurial state”

The case for the state as an active participant in economic processes that create markets and direct innovation has been clearly articulated by Mazzucato, Perez, Anadon and others (Anadon et al., 2016; Mazzucato, 2013; Mazzucato and Perez, 2014; Perez, 2016). This view of the state has crucial implications for industrial strategy. The function of an ‘entrepreneurial state’ (Mazzucato, 2013) requires the state to have the capabilities to carry out this role, and it must be enabled by supportive socio-technical institutions. That means both the resources of the state itself, and its relations to industry organisations, firms and other social and economics actors, must be strategically oriented to allow a mission-oriented industrial policy approach. This still raises issues of the capacity and capability of the state to deliver and implement successful policy and legislation across multiple policy domains. (Busch et al 2018: 120)

But that state, here in the UK, is anemic (it has been bled)

The passage of new climate legislation has been shown to be influenced most strongly by previous experience in passing legislation (and not significantly by political inclination) (Fankhauser et al., 2015). Mazzucato and Perez explicitly call for “sector and technology-specific expertise to be located in government” (Mazzucato and Perez, 2014, p. 21) so that public actors can be effective. The current trend of austerity measures that is reducing the size of central and municipal governments in the UK runs counter to this, and the consequent destruction of political capability in UK energy policy has been discussed as an important limiting factor in the transition to a low carbon energy system (Kuzemko, 2016). (Busch et al 2018: 120)

The role and form of interactions between government and industry are important, to avoid the dangers of poor targeting of interventions, for example, due to lobbying by particular industries or sectors (Rodrik, 2014). Rodrik describes this as government agencies that “need to be embedded in, but not in bed with, business” (Rodrik, 2014, p. 485). He argues that this requires institutions to support innovation to be put in place with clear mandates, for example, support for a portfolio of opportunities, allowing for some failures, together with a willingness to withdraw support when businesses fail to achieve stated goals (Busch et al 2018: 120)

Agree with this below, but, who is going to bell the cat?

Mission-oriented strategies must be democratically constructed and the public agencies that implement them must be accountable with high levels of public scrutiny (Lütkenhorst et al., 2014a,b; Rodrik, 2014)  (Busch et al 2018: 120)

And the cat keeps slipping its bell…

In the context of low carbon industrial strategy, adaptive policymaking must account for a complicated policy mix (Rogge and Reichardt, 2016) involving a number of potentially complementary and contradictory strategies, ideas and instruments. These policy mixes must evolve over time to account for the evolution of the socio-technical systems they are intended to govern (Reichardt et al. 2016) (Busch et al 2018: 120)

That question, however, is not what the authors were seeking to address. They’ve done a very good job on the question they DID seek to address, so it is churlish to criticise for things they never set out to do…

One thought on ““Designing industrial strategy for a low carbon transformation””