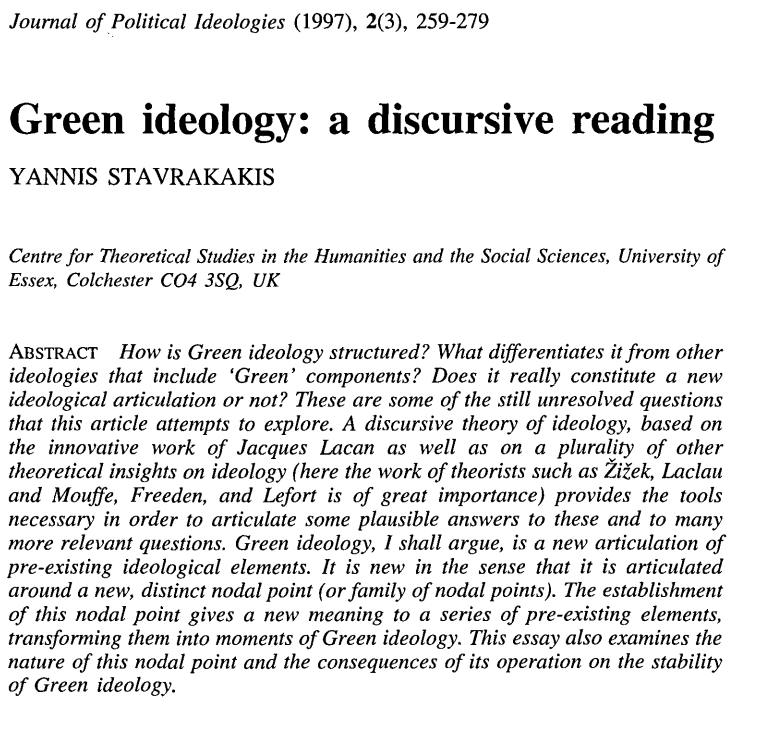 Another one of non-specific/instrumentalist “use” to my overarching project.

via the fab paper on BP and hegemonisation I read a little while ago.

In it Stavrakakis uses some Lacan (really not my cup of tea) and some Zizek (see, mostly, Lacan comment) and points-de-capiton to argue… well

But you don’t get tenure for THAT, as Dr Wife pointed out when I was talking about it.

Skavrakakis uses Lacek to do a good analysis of Die Grunen’s 1980 position, and that of the British Green Party’s 1992 manifesto.

There is lots to commend in this paper, and if you’re “into” Lacan, Zizek and this sort of thing, then you’ll love it.

This was nice – on green/Green audiences needing to believe they were All New.

“In his latest book D. Pepper vividly describes the hostility of his Green audience when he attempted to trace the roots of some Green positions.11 Pepper himself belongs to a group of theorists who stress not the novelty but the indebtedness of Green ideas to older ideological discourses and intellectual traditions such as Marxism, Anarchism, Romanticism, etc. And he is not alone here. In contrast to those who insist on the ‘uniquely fresh’ character of the New Environmental Paradigm, an idea reinforced by terms such as ‘New’ politics and ‘New’ social movements, Wall argues that there are deep roots in Green thinking. His case is that it is possible to describe a great many other creeds and political movements as Green; Shamanic myths, Indian cultural elements, Taoism, Buddhism, Sufism, Zen, etc.12 It has also been argued by Gould, in his Early Green Politics, that it is possible to trace the roots of contemporary Green politics back to Munzer’s Anabaptists and to the politics of William Morris.13 In fact, as Robinson has successfully put it, ‘it would be hard to assess the originality of individual belief components present within the ideology of enviromentalism. The constituent ideas and beliefs can be traced as far back in history as one could care to go, even back to pre-Socratic Greece’.14 ” (Stavrakakis, 1997:261)

And this (emphasis added), well, this is still bang on the money, a generation later, as you’d expect, if history matters (spoiler: it does).

“Ironically, however, and here the paradox reproduces itself, other analyses of concrete Green ideologies, especially of the German Green party ideology, lead to different, if not opposite, conclusions. Instead of a core of supreme meaning and ultimate objectivity Green ideological articulations are revealed as structured around an impossibility. This is the view of Helmut Wiesenthal as formulated in his very interesting book Realism in Green Politics, one of the most important and innovative contributions to the debate around Green politics. In contrast to what analysts and ideologues like Goodin, Spretnak and Capra, and Porritt suggest, according to Wiesenthal, ‘there is almost no proof of the development of a common basic stance or central idea amongst the German Greens. This thesis naturally does not dispute the existence of diverse proposals for a unified Green [page break] philosophy; it simply records the differences, indeed the rivalry between these’.80 The reason for this lack of a unifying principle is, for Wiesenthal, the heterogeneity of the Greens, their diverse origins in environmental and anti-nuclear movements, in citizen initiatives, and in remnants of the student-based K-Gruppen parties: ‘the Greens are not bound together by any single world-view or consensus over positive objectives’.81 Although the Greens were an extremely heterogeneous party, an alliance of expediency between groups with different orientations, there has to be some minimal element that holds them together. For Wiesenthal this central point of reference was lacking at the ideological level and was being replaced by factors such as the survival of the party itself or a negative unification on the basis of what the Greens were opposing. If this is the case, the naming was a tautological performative operation that had no positive ideological meaning. Any such meaning was provided apres-coup. This lack of a unifying principle is the reason for the proliferation of catastrophic scenarios, apocalyptic forecasts, and the impassioned critique of capitalism: ‘radicalness in diagnoses and therapies promised to offset the lack of a fully-developed theory, a lack of which those concerned had been painfully aware of since the crisis of Marxism’.82 ” Stavrakakis, Y. (1997: 273-4)

One new thing I got from the footnotes was “Themenklau”, which he translates as idea theft. And he points out that this is how ideology/hegemony works – the big guy tries to swallow it (blah blah trasformismo blah blah)) but sometimes it might – just might – turn out to be a poison pill that unravels the tapestry – pointless-de-capiton and all that).

The Green Party, op. cit., Ref. 50. This issue of the ‘stealing’ of Green ideas has generated the whole discussion on Themenklau (stealing of themes) in the German Greens. What the Greens fail to understand is that ‘stealing’, that is to say articulating in a new chain of signifiers, is the very way ideological hegemonic struggles take place. Their own ideology, as we saw, was formed in a similar manner. The only way to detect if an ideological form is Green is to detect the location of the Green element—if it is located in the centre, constituting its nodal point, or in the periphery, serving as a mere moment. If in the periphery it will be dependent on another ‘primary cause’. In some versions of eco-feminism the ecological crisis is largely thought to be the result of patriarchal domination; in eco-socialism ecological crises are usually conceived as the result of class domination or domination of man by man. In Green ideology, on the contrary, it is the domination over nature that causes class domination, patriarchal domination and all other forms of exploitation. In any case, however, Green ideological forms are never safe and it is impossible to determine in advance their particular profile. This profile will depend on the particular contingent articulation of particular moments, the nature of which may vary substantially. All these points are well shown in the attempt of fascist or neo-fascist groups to incorporate Green elements in their ideological articulations….