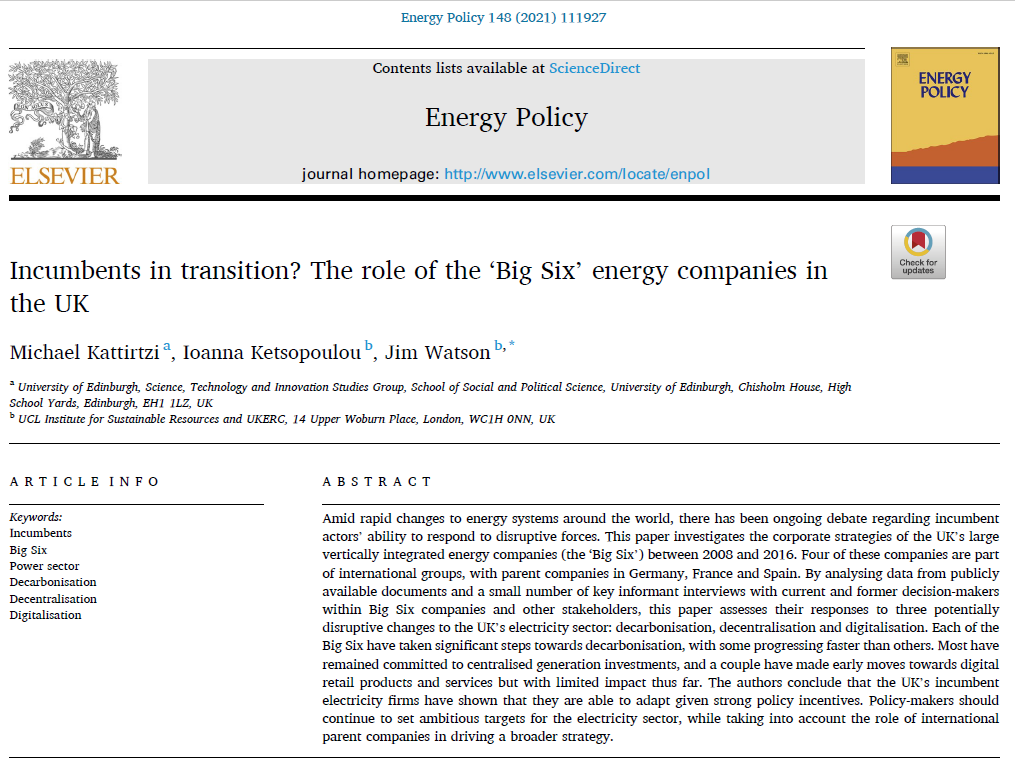 This is a good one for basic background of the Big Six. More on market strategy and tech strategy than political/policy, but that’s fine!

There’s a good orientating intro to this, especially around disruptive innovation and “creative accumulation” –

Clayton Christensen’s research on disruptive innovation argued that incumbents are particularly vulnerable to the emergence of new entrants with innovative solutions (Christensen, 1997;Wilson, 2018). This is because their organisational cultures and practices favour incremental innovation (Winskel et al., 2006). More recent studies have revealed a variety of ways that incumbent firms have responded to disruption (Berggren et al., 2015; Bergek et al., 2013; Smink et al., 2013). Anna Bergek and colleagues showed that different firms in the same industry have adopted different strategies. They argue that creative accumulation by incumbents can provide them with a competitive advantage over new entrants. Creative accumulation involves accelerating upgrades to existing technologies and expanding competencies by acquiring and integrating new innovations. (Kattirzi et al. 2020: xx)

The how and why is clearly laid out

How have the Big Six energy companies responded to potential sources of disruption to the electricity sector? Potential disruptions due to decarbonisation, decentralisation and digitalisation were selected because they have been identified by industry commentators and academic researchers as significant trends that pose a challenge to incumbent companies in the electricity sector

The research question is answered using a mixture of quantitative and qualitative data, primarily covering the period 2008–2016. This period was chosen since it starts with the passage of the Climate Change Act in 2008, and spans the period when the Big Six had dominant market shares in the electricity generation and retail markets. This dominance began to diminish significantly after 2016. The paper also discusses more recent developments in the strategies of the Big Six where these are particularly notable. Publicly available documents (including annual reports, press releases, market data and inquiry documents) were analysed to assess the companies’ responses to decarbonisation, decentralisation and digitalisation. This evidence was complemented by 11 semi-structured interviews with high level energy stakeholders (Bryman, 2016). Nine interviews were conducted with current or former senior employees from each of the Big Six firms in winter 2018/19. Two further interviews with a former Energy Minister and a financial consultant provided an external perspective on policy and market developments.

To aid the reader, the analysis of each company is split into two subperiods: 2008–2011 and 2012–2016. This demarcation is justified as both the generation and retail markets were more stable in the first subperiod. By contrast, the second subperiod was more challenging for the six firms. This was due to new policy and regulatory reforms pursued by the UK Government (DECC, 2011), the regulator (Ofgem, 2011b) and the European Union (European Commission, 2019a); the impact of the Fukushima accident on German parent company strategies (Thomas, 2018), and the rise of new entrants in the retail market (Fig. 3 above).

The details of each are well done, with the big picture not lost

Overall, the generation portfolios of the Big Six companies have become less carbon intensive since 2008. This is in line with overall trends in the UK power sector, where carbon intensity of electricity generation fell from around 500 g of CO2 per kWh in 2008 to around 300 g of CO2 per kWh in 2016 (CCC, 2018). Since 2016, intensity has fallen further – to less than 200 g of CO2 per kWh. While in 2008, 93% of the Big Six’s generation capacity comprised large fossil fuel plants, by 2018 this had dropped to 59% (see Fig. 1). Most of their coal fired capacity has either been closed or is being operated at very low load factors, partly due to European legislation but also because of the UK carbon price floor. Whilst there are important differences between the approaches taken by the Big Six, their investments in renewables and nuclear power (in the case of EDF) have increased.

This paper leads to four main implications for policy. First, despite significant change in the UK electricity sector, incumbent firms have been able to adapt their strategies, investments and portfolios. Adaptations have been extensive in some cases, whereas in others the changes they anticipated have failed to materialise on a scale that was expected….. A second implication is that the UK’s centralised approach to the electricity transition has reduced the level of disruption experienced by the Big Six. This may have made it easier for the UK government to meet its policy goals, particularly for reducing emissions….. A third implication is that some of the potential disruptions due to digitalisation have had minimal impact so far….. Fourth, in seeking to understand how incumbents will respond to change, policy-makers need to take into account their international reach. Four of the Big Six are owned by larger European utilities. As noted above, their responses to policy have been partly shaped by the broader strategies of these groups, and not just by the priorities of their UK-based subsidiaries.

And they have the good manners to flag limitations/further work

Finally, it is important to acknowledge the limitations of this paper. It has focused on six companies in one country over a specific time period. General lessons and policy implications have been identified, which could be developed through further research. Further research could, for example, focus on developments in other countries to allow more direct comparisons between the strategies of the Big Six and those of other incumbent energy utilities. This could include the Big Six utilities (or parent companies) that also have operations in other countries. Further research could also focus on other parts of the energy system. For example, the oil and gas sector also faces disruption from ambitious plans to reduce emissions. However, that sector has a different structure to the electricity sector, and is likely to be affected in different ways. As the energy transition continues to unfold, it will be important to understand the role of incumbents alongside the potential for new entrants and business models to disrupt markets and help meet policy goals.

Particular references of note to me