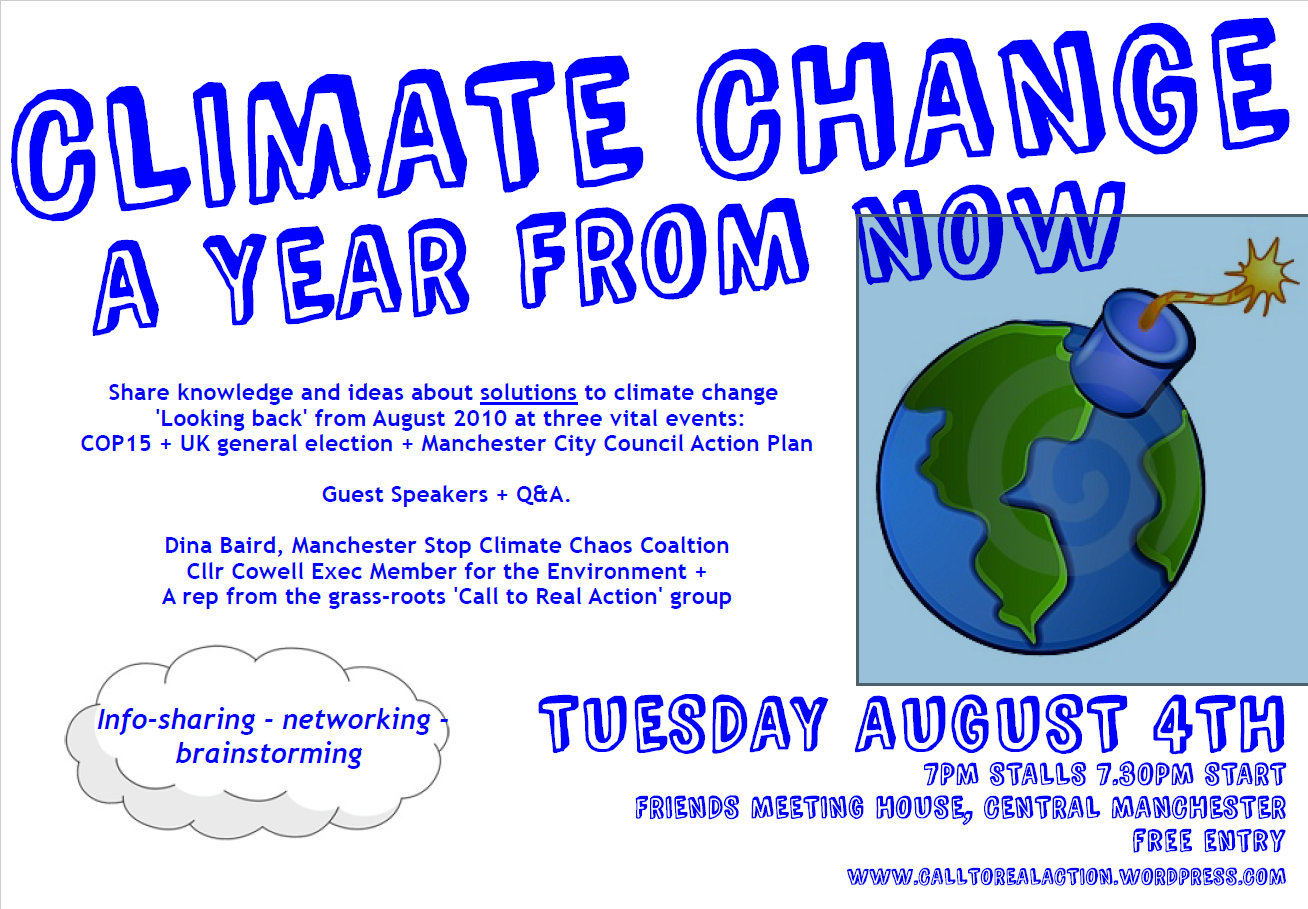 Here comes another international climate conference. We are very good at them now. Thirty years of practice will do that.

I’ve made reasoned and reasonable arguments (i.e. ranted) at length about their worse-than-uselessness for social movements, and am relieved to be part of a group that is refusing the invitation to lobotomise itself.

What has me writing this post is going through some old memory sticks and finding stuff I had completely forgotten or was only dimly aware of. And one of those was this event below, which was held in the Main Hall of the Friends Meeting House, 6 Mount St, Manhester, on 4th August 2009, four months ahead of the Last Chance To Save The World known as COP-15 (Glasgow will be COP-26: the clue is in the name, twice).

There was also this first attempt at a flyer, which was wisely superseded…

And my abiding memory is of nobody saying anything other than “gee Copenhagen is really important and what happens there matters”. This was despite a pre-event plea (repeated several times) to imagine what would need to be happening in Manchester in August 2010. Speakers agreed they should do that, would do that…. and…

it was all too difficult for them.

These events, these emotacycles, they foreclose the impetus to think. They’re like a fist in your face. Very few people do their best thinking with a fist in their face.

They also make it easier to just Blame The Bosses (which we should, of course, be doing, but shouldn’t we also be proposing as well? And if a meeting is explicitly about that, isn’t it bad manners to turn up with your stump speech? But you’re unlikely to have this mentioned to you by either those attending or the organisers. If they think you’ve been intellectually lazy or disrespectful of the intention of the meeting, well, they’re not going to SAY anything unless they’re really feral. And if they’re that feral, they can be discounted. So, you know, turn up, phone it in, get the applause, tick the box.. And so it goes.

So, it was another failure. There was some networking, but nobody to my knowledge got into any habits of thinking beyond the Next Big Thing.

What do we learn? Backcasting is hard enough for a small tight group, let alone an “all-in” situation.