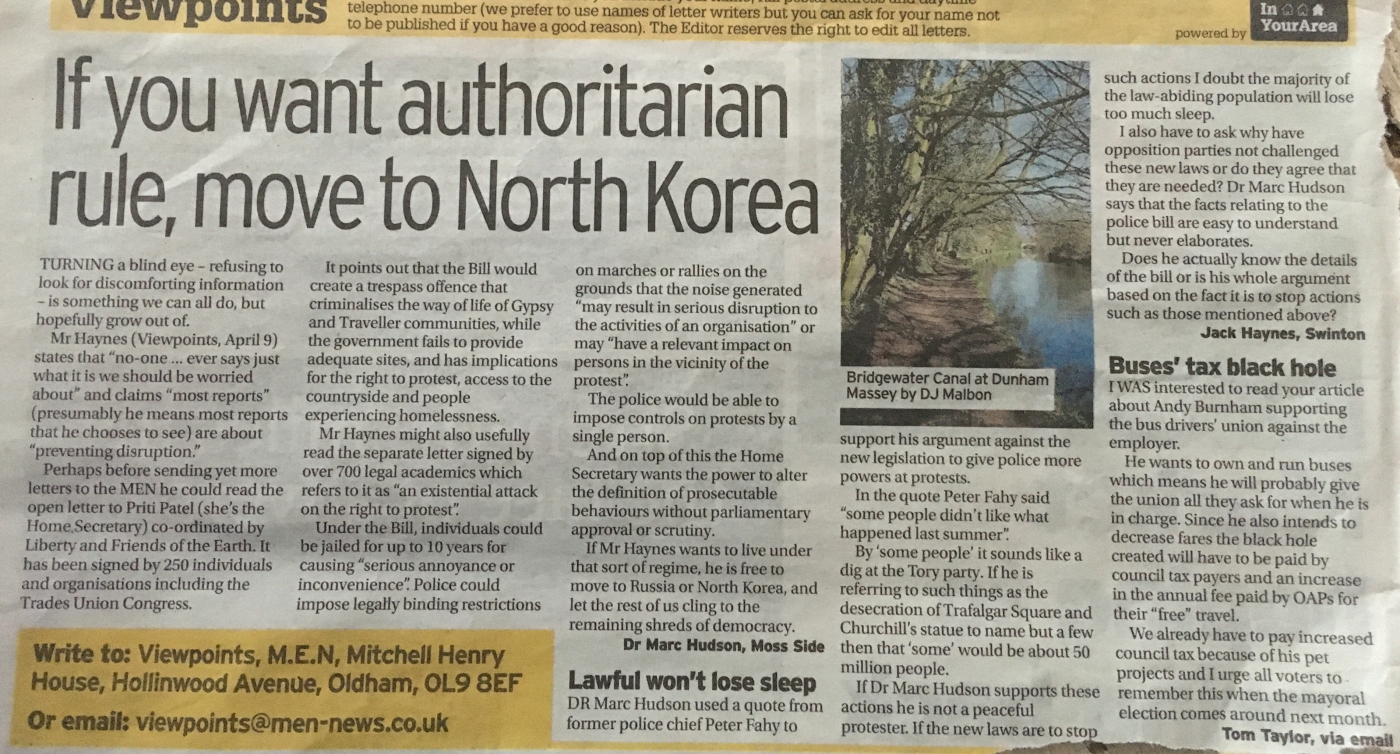 So one way that anyone to the left of Genghis Khan is baited, when they suggest even the mildest of social democratic reforms is “you like communism so much, go live in Russia”. In this letter I thought it might be fun to riff on this.

TURNING a blind eye – refusing to look for discomforting information – is something we can all do, but hopefully grow out of.  Mr Haynes (Viewpoints, 9 April) states that “no-one … ever says just what it is we should be worried about” and claims “most reports” (presumably he means most reports that he chooses to see) are about “preventing disruption.”

Perhaps before sending yet more letters to the MEN he could read the open letter to Priti Patel (she’s the Home Secretary)  co-ordinated by Liberty and Friends of the Earth. It has been signed by 250 individuals and organisations including the Trades Union Congress.

Among other things, it points out that the Bill would “create a new trespass offence that criminalises the way of life of nomadic Gypsy and Traveller communities, while the government manifestly fails to provide adequate sites and permitted stopping places, and has implications for the public’s right to protest, access to the countryside and people experiencing homelessness.”

Mr Haynes might also usefully read the separate letter signed by over 700 legal academics which refers to it as “an existential attack on the right to protest”.Under the Bill, individuals could be jailed for up to 10 years for causing  “serious annoyance or inconvenience”. Police could impose legally binding restrictions on marches or rallies on the grounds that the noise generated “may result in serious disruption to the activities of an organisation” or may “have a relevant impact on persons in the vicinity of the protest”. The police would be able to impose controls on protests by a single person.

And on top of this  the home secretary wants the power to alter the definition of prosecutable behaviours without parliamentary approval or scrutiny.If

Mr Haynes wants to live under that sort of regime, he is free to move to Russia or North Korea, and let the rest of us cling to the remaining shreds of democracy.