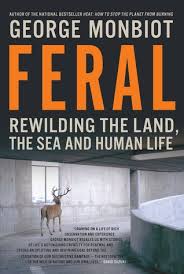 Nature as redeemer, nature as escape, nature as the solace for our “gridded, controlled, mannered urban lives.” So far so romantic.
Well, nature is on the road, and she’s gunning for the lot of us. We’ve poked the beast, and now it really is waking up. On a quiet day, you could hear it snoring. Nowadays you can hear it going about its morning ablutions while preparing to unleash a can of whoopass on the species wot woke it up.
Which made the Manchester Literature Festival event I went to all the more weird. Row upon row of staggeringly white (this is Manchester?) people, of a certain level of (cultural) capital – not so many upward omnivores here – sat in rows while

George ‘Feral’ Monbiot and Sarah ‘Carhullan Army’ Hall stood at t’podium. Hall read from her latest novel, The Wolf Border, which is about a woman, Rachel, involved in a project to reintroduce wolves to the UK. George does what George does well – some witty observations, confidently delivered with a smile. I first saw him do this at the Schumacher Lectures in, bosh, 1996?, when he alarmed the assembled ‘hippie’ gentry by advocating for land rights in the FIRST world. (They were underwhelmed, given the tacit deal with the Schumacher Lectures is that rich people get to be telescopically philanthropic, not locally so. But I digress).  He did not epater la bourgeoisie on this occasion however, but advocated the roaming of the four-legged beasts, especially ones that might contest the ‘white plague’ (sheep, not TB). And deer. [What do you call Bambi with his eyes poked out? No eye-deer. What do you call Bambi with his eyes poked out and his legs chopped off? Still no eye-deer. I’m digressing again, aren’t I?]

This is all well and good, but as the host alluded to, there are slightly bigger fish (well, planets) to fry. So, uncharacteristically, I stuck up my hand and asked this.
“On climate change. We’ve been warned since 1988 by the scientists and some politicians. We’ve done nothing. We WILL do nothing. So we are going to get acidified oceans, seven metres of sea level rise and four degrees plus of warming. Given that, to be provocative, what does it matter if we re-introduce this species or that. “Mother Nature” will introduce – and eliminate – species over the next hundred years as she sees fit.”
George’s answer was in two parts. I will try to report each fairly, and then editorialise.
1) You mustn’t say that we will do nothing, that we are doomed, because that is a self-fulfilling prophecy. The species is hugely altruistic, it’s just a few (percentage) who are screwing it up.

2) Ecosystems with lots of biodiversity (and apex predators etc) are more resilient to shocks.

George – if you’re reading this and I’ve been unfair, lemme know. Ditto if anyone who was there is reading this…

What I wanted to say in response, but obviously didn’t.

1) The “you mustn’t say we’re doomed because that means people will give up” argument is beginning to get on my tits. I think it can and should only be made by people who have done a thorough job of studying WHY our response has been so poor (it’s not ALL Exxon’s fault) and – this is the crucial bit – have some clearly-stated suggestions about HOW TO DO THINGS DIFFERENTLY ‘GOING FORWARD’. George may have these, but he didn’t say them on Sunday (fair enough – folks were coming to hear him talk about wolves and rhinos, not social movement strategy).
We don’t say “you shouldn’t tell people with lung cancer that they have lung cancer because then they’ll get upset.” We expect to treat ourselves/each other as adults, who can read a Keeling Curve, read the emissions trajectories and understand the concept of climate sensitivity, and do some pretty rudimentary guesstimating.
ALSO, it’s not my ‘doom’ that is killing the species’ chance of seeing the 22nd century in reasonable shape. It’s capitalism, technological hubris, consumerism, population, the failure of social movements to cope with neo-Gramscian passive revolution strategies, and good old fashioned inertia baked into ‘the System’ (, “man”).

a) curiously anthropocentric and

b) kinda misses the point about the shocks to the System. The second half of the 21st Century is (probably, okay, probably) going to make the first half of the 20th look like a picnic. This or that species of wolf is not going to mean there isn’t starvation, plague, war and all of that zombie apocalypse stuff. Wishful/magical/totemic thinking to think otherwise, no?

Sarah Hall’s answer I can’t categorise so clearly (I’m sexist man only paying attention to men? Maybe. Or just getting old? Or both). She seemed to be saying, with the example of the 2005 floods in Carlisle, that the cities will be affected, and it’s only when that happens that we will do something.

Worth reading on this “back to Nature” malarkey

PS Thanks to CG for the ticket!!

3 thoughts on “Of Monbiot, Manchester and miserable ‘feral’ futures.”