Went to something on “radical information literacy.”  The questions are Who knows things,  how to know things/find them out, how to critique sources and figure out when they are being manipulated by friend or foe? Et cetera.   At least it flags up that a simple “information deficit” model is grotesquely inadequate for explaining why we are numb in the face of pile of debris growing skywards in front of us.

Apparently the big thinkers in this are Professor Louise Limberg and Doctor Annemaree Lloyd.  The latter talks about “information landscapes” which may or may not mesh with the Multi-Level Perspectives formulation of landscapes, regimes and niches, I dunno.  Me, I have grown to think in terms of battle-spaces.  And psywar.  And the deliberate creation of ignorance (aka “agnotology”).

Inevitably old Jurgie-babes (Habermas) and  his instrumental/communicative rationality came up.  His “ideal speech communities” didn’t.  When they do I always want to say ‘mate, the bourgeoisie didn’t mean all this guff about human rights; they just needed the poor as shock-troops against the old aristocracies. Deal with it.”

Right, so what has this got to do with “domestic” (1) violence?  Information literacy is about dialogue, the questioning of definitions of reality and (therefore) ultimately, power.

And violence is about power (pace Arendt -(2).  This from a brilliant and horrifying article “Home Truths,” by the journo Jess Hill, about Australia and domestic violence (going up)

We reach for these excuses because the alternative – that hundreds of thousands of Australian men have chosen to inflict diabolical cruelty on their partners – is almost inconceivable. Men’s behaviour change programs don’t treat perpetrators for anger problems, because anger management doesn’t work. The violence isn’t an overreaction, it’s a tool – one of many that abusers can use to exert control over their wives and girlfriends….

“People really struggle to understand that for family violence to be present, there are two key attributes to it. One of them is that one party is in fear of the other. The other is that the abuser uses a planned, systematic approach to remove a person’s confidence, support networks and independence in order to highlight their own power and control within the relationship” [says Annette Gillespie, the head of Victoria’s Safe Steps Family Violence Response Centre.]

Most people have arguments with the person they love. It’s normal to feel jealous, say things you regret, even scream the house down. It only becomes domestic violence when this is bent towards controlling the other person, in a way that provokes fear. 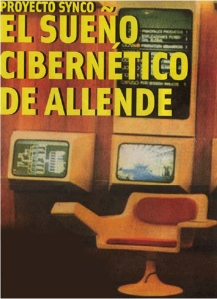 Perhaps as well as citing the 1970s (3) (Cees Hamelink 1976 “An alternative to news.”) we also need thinking about what happened to earlier efforts at communicative dialogue and power attainment under, ooh, Maggie Thatcher’s favourite Latin American dictator, Augosto Pinochet.  He and his mates crushed the Cybersyn experiment of Stafford Beer et al, which put forward the shocking idea that maybe we didn’t need the rigid hierarchies, and that working class people might be able to self-manage….

Two more quotes and then I am done.

..Harwood blinks. ‘It’s what we do now instead of bohemias,” he says.
“Instead of what?”
“Bohemias. Alternative subcultures. They were a crucial aspect of  industrial civilization in the two previous centuries. They were where  industrial civilization went to dream. A sort of unconcious R&D, exploring  alternate societal strategies. Each one would have a dress code, characteristic forms of artistic expression, a substance or substances of choice, and a set of sexual values at odds with those of the culture at large. And they did, frequently, have locales with which they became associated. But they became extinct.”
“Extinct?”
“We started picking them before they could ripen. A certain crucial growing period was lost, as marketing evolved and the mechanisms of recommodification became quicker, more rapacious. Authentic subcultures required backwaters, and time, and there are no more backwaters. They went the way of Geography in general. Autonomous zones do offer a certain insulation from the monoculture, but they seem not to lend themselves to  re-commodification, not in the same way. We don’t know why exactly.”‘
William Gibson, ‘All Tomorrow’s Parties’.

Then from psychologist Carl Rogers, talking to a businessman whose company had set up a ‘flat hierarchy’ factory.

He told me that while the experimental plants continue to do extremely well, and he feels pride in the work he has done with them, he regards his work with the corporation as a failure. The top management, though appreciative of the increased profits and good morale of the experimental plants, has not moved to follow this model in their other plants, even though it appears evident that overall profits would be increased.

His answer was most thought-provoking: “When managers from other plants look closely at what we are doing, they gradually realize how much of their power they would have to give away, to share with their employees. And they are not willing to give up that power.” When I stated that it appeared that power over people was even more important than profits­ which are supposed to be the all-­important goal in industry­ he agreed.

Hope (4), eh? Oh well.  And forty plus years later, we are heading for the not-so-great acceleration and the  Panspectron.  Hohum.

I left the thing early, mostly because of the widening gap between theory and practice.  There was a time I used to get angry about that stuff, but now I am either resigned to it or more compassionate (poor poor humans.  Apes with opposable thumbs, gods that shit. Oscillating between the two)

1.  To quote a friend on facebook – “I don’t like the term ‘domestic’ it implies some kind of loophole, a get out clause, it’s a right of property or possession, and therefore it fails to attract the same kind of criminal sanction as assault, GBH or worse. Such conceptual terminology is important as it reflects the seriousness of how societal norms function and how they are perceived. Change the name and its conceptual nature, how society perceives these crimes and the punishment will follow – its a form of judicial performativity, but their needs to be a will to promote the unacceptable nature of failing protection.”

2. For Hannah Arendt, seriously smart thinker of the mid 20th century, physical force/violence was the antithesis of politics, and politics was about discussion, debate, rationality and all that sort of thing.

3. And because you can never have too much Donald Duck – Ariel Dorfman and How to Read Donald Duck

4. ‘A January 1994 conference of Jesuits and lay associates in San Salvador considered both the narrow and the broad aspects of the state terrorist project. Its summary report concludes that “it is important to explore to what degree terror continues to act, cloaked by the mask of common crime. Also to be explored is what weight the culture of terror has had in domesticating the expectations of the majority vis­-a­-vis alternatives different to those of the powerful, in a context in which many of the revolutionaries of yesterday act today with values similar to the long powerful.” The latter issue, the broader one, is of particular significance. The great achievement of the massive terror operations of the past years organized by Washington and its local associates has been to destroy hope. The observation generalizes to much of the Third World and also to the growing masses of superfluous people at home, as the Third World model of sharply two-­tiered societies is increasingly internationalized…’ Noam Chomsky, World Orders, Old and New page 53