People of Colour are gonna be shocked – SHOCKED – to learn that rich white people are sock-puppeting them in an effort to stay rich.

Because, you know, it’s so unusual for powerful interests to totally disregard the actual long-term health of everyone else, and to claim to be benevolent while continuing to despoil and plunder.  Yeah, so unusual.

Just in the space of today (so, not going near the David Starkey thing), we’ve got this 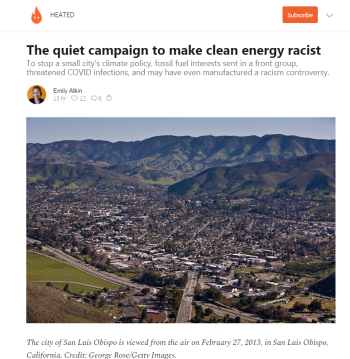 To stop a small city’s climate policy, fossil fuel interests sent in a front group, threatened COVID infections, and may have even manufactured a racism controversy.

my favourite bit is this –

Vines, of the SLO NAACP, was particularly incensed by the last-minute pile-on by business-focused minority groups from outside the community—but not because he thinks they were necessarily wrong about racism. In fact, he agrees that the economic impacts of the Clean Energy Choice policy—good or bad—will be discriminatory against Black and brown people.

“When you live in a racist economy, all policy that affects the economy is racist,” he said. “So they can make that accusation about anything.”

and this about the Global Warming Policy Foundation (not a charity, always read the label) from the folks over at DeSmogBlog.

Climate and energy experts from sub-Saharan Africa have dismissed a new report that argues fossil fuels are the solution to energy poverty in the region.

The report, titled Heart of Darkness: Why electricity for Africa is a security issue, is the latest publication from the Global Warming Policy Foundation (GWPF), the UK’s most prominent climate science denial campaign group.

It argues that groups that give international aid and financing, like the World Bank, are stymying energy development on the continent by imposing rules that prevent continued investment in fossil fuels. The report, which leans heavily on experts from the University of Witwatersrand’s clean coal centre, argues that clean coal is the solution to African electrification.

Amos Wemanya, a campaigner at Greenpeace Africa, said the GWPF’s history of spreading misinformation on climate change means the group is not well-placed to advise on the continent’s energy policy.

“Africa does not need advice from the so-called experts, like Lawson, on how to make its people access energy,” he said.

Oh, and seriously, Heart of Darkness”?  Seriously? Plugging into myths of the savage much?  Dog-whistling to your rich old white chums much? Maybe take a read of what Michael Eric Dyson has to say.

Finally, as a white dude,  it is probably quite fucking exhausting to be a person of colour, and to see the very language you are using to try to wrest power away from the goons with their knees on your neck mobilised against you.   That shit – along with the actual deeds beyond the words – needs to be challenged. We gotta find a different way.